About the mitzvot of Jewish woman

From the Talks of Lubavitcher Rebbe we could found that the initial letters of the three mitzvahs especially entrusted to women—challah, niddah and hadlakat neirot — correspond to the letters of his mother’s name, “Chana.” In her memory, he would encourage all women and girls to strengthen their commitment to these mitzvahs, and toTorah observance in general. In honor of this great woman we dedicate the following overview of these three mitzvahs, their application and deep spiritual meaning.

The Jewish woman has been gifted with three special mitzvot that are the foundation of Jewish living.

While both men and women are obligated in these fundamental mitzvot, the Jewish woman has been given precedence and carries the authority in ensuring their proper fulfillment. As the backbone of her home, she sets the tone and imbues her environment with its inner spiritual mission.

The Shabbat candles ushering in the holy day of Shabbat transform our mundane weekday into a time of peace and sanctity. The challah taken from our loaves of bread reminds us that our sustenance comes from G‑d and, like the laws of kosher food, demonstrate that even the seemingly mundane activity of eating is a G‑dly act. And the laws governing family life reflect how even our bodily drives can be holy.

The common theme weaving through each of these mizvot is the feminine ability to uncover, kindle and nurture the spark of holiness and G‑dliness found within every part of our world.

At the vanguard of what is most dear to us as a nation, the Jewish woman carries the torch of tradition and passes on the chain of continuity to the next generation. She nurtures her inner space and her home, and fans the light of G‑dliness to create a better world.

Darkness is settling upon the world; the workweek is coming to a close. But as the sun goes down, a new day is being ushered in: the day for which we toiled the entire week, a day of rest and tranquility, the holy Shabbat. 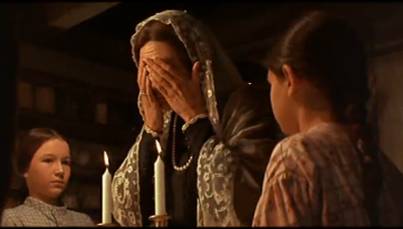 Every mitzvah introduces light into the world, but with certain mitzvot the light we generate can actually be seen. Women and girls across the globe greet the Shabbat (and also Jewish holidays) by lighting candles.

The Shabbat is the day that brings illumination to our world, which so often seems to be dark and negative. Candles are a metaphor for Torah and for the human soul, and represent the light and holiness we bring to the world.

The first woman to light Shabbat candles was our matriarch Sarah. While the mitzvah of lighting Shabbat candles rests upon all members of the household, the woman has been charged with the actual lighting. (If no adult woman is present, however, a man should light the candles.) The time of candle-lighting is an especially auspicious time for private prayer. As a woman lights her candles, she ushers in peace and blessing into her home and G‑dly energy into our world.

The candles should be placed on or near the Shabbat dinner table.

Put some coins in a charity box before lighting. Dressed in Shabbat finery, at least 18 minutes before sunset, light the candles (before marriage, women and girls light one candle; post-marriage, at least two candles).

Cover the flames with your hands, then cover your eyes while saying:

Blessed are You, L‑rd our G‑d, King of the universe, who has sanctified us with His commandments and commanded us to light the holy Shabbat candles.

Uncover your eyes, look at the flames, and greet your family with “GoodShabbos” or “Shabbat Shalom.” No weekday activities are to be done from that point on.

The first portion of your kneading, you shall separate as a dough offering(challah) . . . In all your generations, give the first of your kneading as an elevated gift to G‑d. (Numbers 15:20–21)

When the Jewish people first entered and settled the Land of Israel, one of the gifts they were commanded to give to the kohanim, the priestly tribe, was challah—a portion of dough separated from their kneading bowl every time they baked bread.

Today, we do not actually give the challah to the kohen. However, we still observe the mitzvah by burning the challah portion, as its sacredness prohibits us from using it.

The mitzvah of separating challah can be done by every Jew. Traditionally, however, this has been one of the special mitzvot entrusted to the Jewish woman, who is so influential in shaping the values and attitudes of her family, Taking challah expresses the belief that all our sustenance comes to us through G‑d. Whatever we are given is not for our use alone. If we have wisdom, money or good health, our first step is to put them towards a G‑dly purpose. The hand that separates the dough as a gift to G‑d reminds us that even while kneading the most pedestrian components, we must suffuse our world with its G‑dly mission.

By extension, the kosher laws are also considered part of a woman’s special mitzvot, and she is entrusted with ensuring that these laws and all their details are properly kept. The observance of kashrut has been a hallmark of Jewish identity. Like the mitzvah of challah, it conveys that holiness is not confined to holy places; rather, life in its totality is a sacred endeavor. Even the seemingly mundane activity of eating is a G‑dly act and a uniquely Jewish experience.

Challah is taken from dough made from wheat, rye, barley, oat or spelt batches that use at least 59 ounces of flour. If you use less than this but more than 44 ounces, take challah, but don’t recite the blessing.

The liquid mixed with the flour should be mostly water. (If not, add a drop of water, and then take challah without reciting a blessing).

After kneading the dough, before it is shaped into loaves, place the dough in a single bowl and recite:

Blessed are You, L‑rd our G‑d, King of the universe, who has sanctified us with His commandments and commanded us to separate challah.

Separate a small piece of dough, approximately one ounce, and say: “This is challah.” Wrap the challah in foil and burn in the oven.

The laws of family life reflect the Torah’s view that the physical union between man and woman is holy and G‑dly. 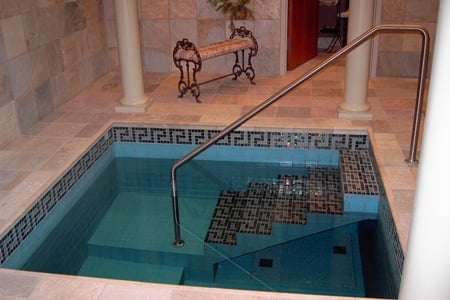 The mandatory separation times fosters feelings of longing, desire and a sense of appreciation, which are followed by the excitement of reunion. It offers couples the possibility of repeated “honeymoons” during the course of their marriage. The times of physical separation also ensure that the relationship sets time to nurture not only physical closeness but also strong emotional bonds.

Most Jews see the synagogue as the central institution in Jewish life, but Jewish law states that constructing a mikvah takes precedence. Both a synagogue and a Torah scroll, Judaism’s most venerated treasure, may be sold to raise funds for the building of a mikvah. It is no exaggeration to state that the laws of family life and mikvah which are entrusted to the Jewish woman are the touchstone of Jewish life and the portal to a Jewish future.

From the onset of menstruation until seven days after its end, couples may not engage in any direct physical contact, or even physical manifestations of affection. After nightfall of the seventh day, the woman visits the mikvah. Today’s mikvah looks like a fashionable spa, with luxurious bathrooms, vanities, fresh towels, disposable slippers, a comfortable robe and all other essentials.

After a relaxing and thorough bathing, the woman then enters the pristine, warm mikvah waters. After immersing once, while standing in the waters of the mikvah, the woman recites the blessing

Blessed are You, L‑rd our G‑d, King of the universe, who has sanctified us with His commandments and commanded us about the immersion.

In accordance with widespread custom, she then immerses twice more. Many women use this auspicious time for personal prayer and communication with G‑d. After immersion, the couple resume marital relations.

The aesthetic beauty of the facility, along with the rejuvenation and spiritual boost experienced, explains why the mikvah is frequented by many who practice no other formal Jewish observance.